PRETTY FLY FOR A SHORT GUY.

I saw two guys in the park the other day who were obviously friends. They were both white, scrawny little guys with oversized basketball jerseys and caps sat at an angle to neither lend shade from the sun nor attract members of the opposite sex. They met up with an exaggerated high five, bumped chests, and I'm sure I heard one of them say, 'Yo nigga, sup?'
They sort of looked like this guy. 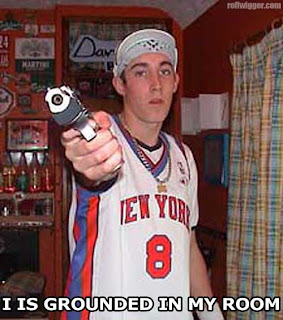 Now I live in Australia, this happened in Australia, (not the U.S. of Australia) A U S T R A L I A, in a park that is, like most parks here, relatively clean and visited mostly by the elderly, or dog walkers, or an amalgam of both. Its not gang territory and its not 'the hood'. It couldn't be the hood if it wanted to be the hood. It could probably do a good rendition of a trailer park, given some time, but there will never be a chopper with a spotlight overhead and no-one will ever write a hip hop song about it.
Am I now so far out of the loop, so over the hill that I missed when it became ok for little white guys to call each other nigga? Did that become cool at some point?
Actually that reminds me of something else that I'll mention now before I forget. A couple of years ago, I was at a music festival in Brisbane and in-between bands they played music over the P.A. That was fine, though most of it was poppy crap, it kept people in the spirit. At one point however, the DJ played that Snoop Dog song where he says "Drop it Like its Hot" in repetition a number of times throughout the tune. As I looked around at the crowd, mostly white kids with sunburns, I noticed that loads of them were making hand gestures that I thought were only ever used by hip hop musicians. You know the sort of thing, fingers bent or pointed out in random spastic combinations, and waved around like a hot kipper. 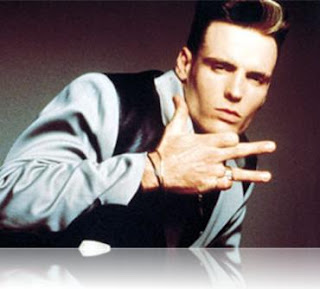 It looked wrong. White people should not try to act like gangstas. It doesn't look cool, it doesn't suit, it just looks stupid.
But anyway, back to what i wanted to talk about. The two guys in the park calling each other nigga.
I think they might have lost the meaning of the word somewhere, which, you know, I suppose is possible. Its not really heard anywhere these days unless its on a tv show with U.S. gang members. So maybe they think its a term of endearment, and hell...maybe it is now.
I see loads of black lads on tv calling each other nigga, so maybe its changed the meaning of the word. Maybe its that thing where people try to take the power out of the word by using it in an unusual way. Thats fair enough. I can get behind that. I wish the nazis didn't fuck the swastika and the Charlie Chaplin moustache and maybe the power of those images can be diffused as well. Perhaps if a "My Little Pony" had a Hiltler moustache or Batman started wearing a swastika? 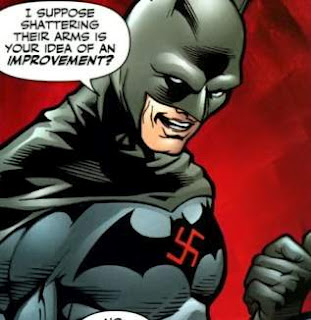 (I thought, 'what the hell' I'll google "batman nazi"'. I did not expect that anyone had imagined Batman quite in this way but there you go). 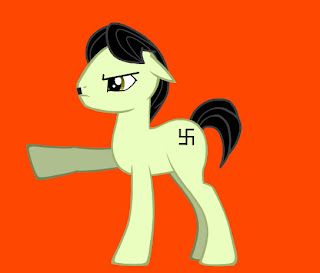 (ok...what the fuck? Can you just google anything now and something comes up?) 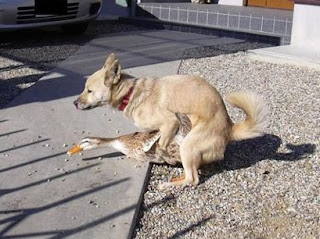 (I guess you can)
ANYWAY...
Can this sort of thing work for everyone?
Are their disabled people out there right now yelling out across the street, "Yo retard," or "Hey spastic", to their disabled friends?
That also reminds me of something that happened to me once, while on a train in Melbourne. A young fella in a wheelchair rolled up next to my seat. I don't know what his condition was. He was the sort of lad who had pretty limited control of his hands, (they moved a lot, I just don't think he had great control of them) and he looked like he was trying really hard to lick the back of his throat.
So he asked me, 'Hey...do you know who I am?'
I said, 'no...no I don't know you.'
He then asked me if he was a spastic or a retard.
How do you answer that?
I wasn't sure if either of them was PC but I figured I had a 50% chance and so I said, "retard".
For a few seconds there was silence. I looked from the guy to everyone else on the train and I swear everyone looked unsure, but when the guy started telling me off about calling him a retard, just about every face on that train became that of an accuser.
There were a few that just looked thankful that they hadn't been in my position, but most took on the air of the high and mighty, damning me for my ignorance.
Fucking disabled people shouldn't set traps, its an unfair use of their disability and you can't defend yourself against it without looking like a prick. I could get attacked by a gang of kids with down syndrome and left bloody and comatose in a gutter and people would still think I was the asshole. When you think about it, its very patronising, but I must admit, if I was disabled, I'd probably milk it a bit. I'd shit my pants...just once...just to see what its like. Just saying.
I've since found out that neither "spastic" nor "retard" are kosher and that recently, even "disabled" is frowned upon. "Ability challenged" is the latest. I'm not sure if a guy with no feet is "foot challenged", that having feet for him is a challenge, its an impossibility. There's no challenge, its not like if he concentrates hard enough he might get feet. He's disabled in that he's not "able" to have feet.
I guess nobody told the spastic guy on the train what he was supposed to call himself.
Midget? Dwarf? Are any of those ok for describing little people? Is "little people" ok? Its certainly descriptive. Height efficient? I don't bloody know. I figure dwarf must be dodgy right? It gives them a sort of "sword and the sorcerer" feel, but then maybe they like that. Is it cool to call a tall person a frost giant? I have an X that I've often called an ogre, but I suppose that's just childish and hurtful......to ogres.
But you know what? I don't think the scrawny white guys using the term "nigga" are taking the power out of the word, they're just turning it into something shitty again, in a different, perhaps less volatile way than before, but its still shitty.
Anyway...I'm sleepy...so here's a photo of a kitten. 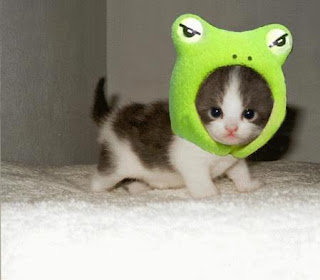 STAY FILTHY.
Posted by Filthy the Bear at 3:41 AM No comments: