I'm sitting here flicking through the channels in the cave and have settled on a ridiculously bad film named Sharkboy and Lavagirl. Its not just bad, its attrotious. I have no idea who most of the cast are but Sharkboy, I have noticed, is familiar to me, and then it hits.
Sharkboy is that kid who plays the werewolf in those Twighlight movies.
Though terrible, I actually think Sharkboy is a better role than the werewolf. It has better dialogue and he has some pretty cool powers. Sure he might not turn into a giant dog (he doesn't look like a wolf, he looks like a dog) but he has a cool fin on his back and, hey look...he just grew some sharp teeth.
But you know what really makes Sharkboy a better role? He's not in a movie with a winey, PMSed out cow and a skinny enemic nancy boy who sparkles in the sun.
Yes I have seen the first 2 Twighlight movies. I was tricked into the first one, but watched the 2nd out of some sort of perverse curiosity. I had to see if it was possible to make 2 films that were that bad.
The 2nd was markedly worse. Where the 1st shit on the vampire myth, the 2nd shit on it, scooped it up in a doggybag, marinated it for 4 days, and then served it up with fries and a hot apple pie.
Now when I was a kid vampires were scarey bastards with fangs, some limited mind powers, super strength and they could turn into a FUCKING BAT!!! They were badass, and drank blood, but then they had their troubles. They couldn't eat garlic, so italian food was out, they couldn't go near crucifixs, you could stake them with a "WOODEN" stake (not silver. Silver is for werewolves!!!) and if they went out into any sunlight, even on a cloudy day, they burst into flames and died. 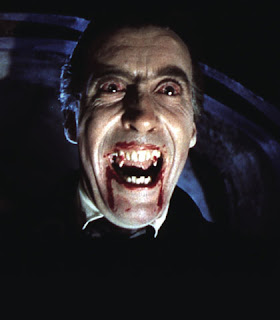 The vampires in Twighlight are of a different, more palitable breed. They don't seem to have problems with religious parafinalia, they can cook with garlic (even if they don't actually eat it), they don't turn into anything furry and/or vicious animals, they're all frozen at the age of 17, and yet none of them are stricken with an eternity of acne, random hard-ons, or (and this is what really makes them unrealistic) none of them seem to have an eating disorder.
Well...unless you include the blood thing...but the main vampires in these movies don't even do that, or at least they don't go around sucking on virgins anymore (well that's not completely true). They drink blood but instead they pilfer it from the hospital, that's right, the red cross.
This is supposed to be okay? Stealing blood from the hospital? So the ads I see on tv all the time asking for much needed blood at your local red cross don't mean anything to these people? Huh...maybe they are evil pricks after all. Its more of a white collar crime this way though I figure, like tax evasion or embezzlement.
But look the worst thing about these much watered down vampires, I'm sure you will agree, is their reaction to sunlight.
I don't know how else to say this but to just lay it out...they sparkle.
There's no burning, no sizzling of flesh, no peeling of skin, not even a blister, or a nasty rash. The Vampires in Twighlight...sparkle.
Huh?
I sat gagging through the second movie and watched as, fraught with the pain of leaving his girlfriend (who is just a little young for him don't you think. The guy is a vampire. He's like 200 years old. He should be going out with senior citizens or at the very least adults...not seventeen year old girls. Its creepy, and I don't mean in the horror sense, I mean in the Pedophile sense) the main "vampire", who's name escapes me now, showing that I have at least a shred of self respect left, decides that he will expose himself to humans, thereby sentencing himself to death at their hands.
There's a problem with that. Nobody would give a shit.
I mean am I supposed to believe that people would see a sparkling kid and that the first thing that would come to their minds would be "Oh shit! Its a vampire! Kill the evil bastard!"?
At best he might raise a few eyebrows. Its possible that their might be some conservative old folks passing by who might just be homophobic enough to sneer at, what to anyone, would look like some stupid kid with his shirt off wearing glitter, lipstick and foundation. Oh and hair product.
Really the author should have just called them something other than vampires because I'm not really seeing the resemblance.
Mind you, this is just another example of how western culture is making everything more safe and easily digestible, like how American football was made vaguely watchable by having girls play in lingere, or how now a packet of nuts has a warning on the label saying "MAY CONTAIN NUTS". I should bloody hope so.
So where do we go from here?
Perhaps I'm a vampire. Yes. I do believe I am a vampire. I'm a vampire for the modern cotton wool, you can't smack your kids, or show pictures of a baby with a penis drawn on the side of its face on facebook, age.
It sucks being a vampire. The life of a vampire is a burden. Too much garlic gives me heartburn. I have trouble sleeping more than 7 hours per night. I will live for a very long time, some 80 or 90 years at best guess, and in that time I shall see the world change. I have watched as my loved ones, mainly my parents and grandparents have died, leaving me emotionally challenged and alone. I have seen the era or good saturday morning cartoons come and go and then come back again.
I can be killed with a wooden stake, just like most vampires, which I think is fairly reasonable proof, and I can't go out in the sun...for more than 15mins...without a hat...a shirt...and sunscreen...or I'll get burnt and eventually, if I'm also genetically predisposed, I may die of skin-cancer.
God its hard living with this curse.
And don't get me started on True Blood.
I'm not sure when Melrose Place became a vampire show but I have to say that I was a lot more afraid of Heather Locklear than I am of any of the characters on True Blood.
Angel is a more believable vampire...and that's saying something. 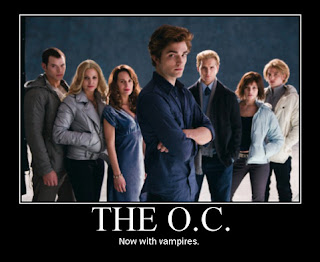 Anyway...
I don't get riled often but there's something else that has caught my attention of late and its shitting me off a bit. Its the use of the phrase "the old".
Its used mostly, as far as I can tell, to lend a familiarity to things, objects, etc. You might hear people refer to things with the preface "the old", as in the old car, or "the old" house. I'm not talking about when it might be used in a descriptive fashion. These people aren't saying that the car or the house are old as such, only that they hold an affection for these things.
It goes further than that and people are using it to describe things like governing bodies and even concepts. People say things like, 'Oh the old governments doing a pretty shit job ay?' and I've even heard someone say, "the old Philosophy is a bit of a tough nut to crack."
There may be nothing inherently old about these things.
Do you see what I'm talking about?
The straw that broke this camel's back was hearing a guy talking about his newborn at the beach and saying, "the old baby gave the missus a fair time comin' out. Reckon he was draggin his fingers against the sides."
Its a baby...its NOT old! Unless its a vampire baby, in which case it must have been a neuveau vampire like me because it was pretty sunny out.
Stay Filthy.
Posted by Filthy the Bear at 2:45 AM No comments: