I googled myself the other day and turned up some interesting entries. The real surprise was "Filthy Slut gets fucked by big black Bear". Its at http://www.goodtgp.net/0772-20332/filthy-slut-fucks-with-well-hung-black-bear.html but basically its porn. Not even good porn and there certainly wasn't a bear involved.    I mean...I figure there was no bear. Its not like I watched it or anything. I especially didn't watch the bit where the big hairy fat guy uses his...swizzle stick...to dish out some domestic violence...but I imagine it was sort of funny.
When did big fat hairy men start using the word "bear" as a descriptive term for their kind? That's not cool. I'm a bear and I take offence to that.
What if people start thinking I'm Filthy the Big Fat Hairy Guy?!
But then maybe that's the tactic I should start taking. Maybe if I start calling myself Filthy the Big Fat Hairy Guy then big fat hairy guys will take offence and realise the error of their ways. They'd go back to just being Big Fat Hairy Guys and I could reclaim "Bears" for myself and all the other Bruins.
Now I understand that Big Fat Hairy Guys is quite a mouthful and probably the reason they started using "Bears" in the first place but surely they could shorten it. BFHG would be fine, and it makes them sound nicer...sort of like BFG the Big Friendly Giant from the Roald Dahl book but with an extra letter. Big Friendly "Hairy" Giant.
Its quite apt. Mind you I don't think the BFHG in "Filthy Slut gets fucked by big black Bear" is really the sort of character you'd want hanging around your kids so maybe not.
Speaking of annoying kids...
I've been working in a school recently and I would like to know what has happened to normal names? When did strong simple names like John, Robert and Lisa get replaced with the terrible names that parents call their little monsters today. It almost seems that people take naming their child as some sort of competition to see who can come up with the most audacious and retarded name. (yes I realize I've mentioned this in previous blogs but it shits me, its my blog and if you don't like it then scroll down. Tell you what...I'll place a little * at the start of the part of the blog where I talk about something else...just to make this easy for you.)
So...I heard a teacher do the role call for her class of 1st graders and it went something like this;
-Aragorn (I shit you not. Someone named their kid after Lord of the Rings)
-Cayenne (as in the pepper)
-Cyra (huh?)
-Erin (yay a normal name)
-Harmony (hippy)
-Kiannan (This is one of those names where the parents have tried to use a tropical motif.)
-Nurf (why would you call your kid Nurf. The other kids will kick him like a nurf ball.)
-Orlando (much like Shania or Brittany, this is a celebrity based name. Again linked, most likely to Lord of the Rings)
-Zion (I wonder if his parents understood the religious connections. May as well have called him Mormon)

This doesn't account for the entire class but it gives you a pretty good indication. These were all little white kids and I don't like to judge but when their parents came to pick them up in the afternoon there were a lot of bike pants and tracksuits.
*
So Christmas is coming up. I like christmas. There's something very bearlike about Christmas. I think its all the fir trees.
Growing up in Germany's Black Forest we had a slightly different Christmas than most people. Sure we had Santa and tinsel and presents and all that stuff but did you know that Santa has a brother?
In the forest and in many parts of Germany Christmas is also the time when Krampus or as we knew him Hans Muff would come visit.
Unlike his brother Santa, Hans Muff didn't so much look like a man. He looked more like a devil, with black fur, horns, sharp teeth, claws and nasty eyes. He carried not a bag of toys but a switch of sticks and a chain. 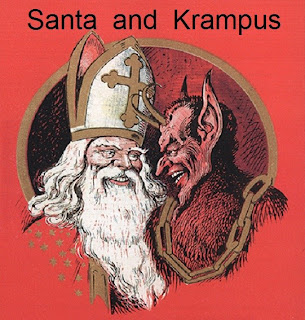 If you were a good little girl or boy, Santa would give you gifts, but if you were bad... 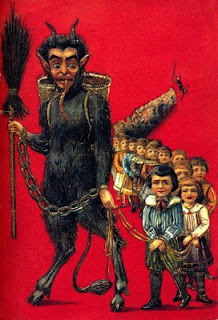 ...well Hans Muff would chain you up, drag you into the forest and beat the crap out of you!
I like this tradition and its especially relevant for todays kids where there is no discipline. Kids don't get smacked anymore and they have no threat. (I've heard kids say they want to get suspended from school so that they can have a holiday for a few days.)
Hans Muff is a threat. "Either you do what is right or you will be beaten." Getting a lump of coal was never a threat and didn't change the way we acted. It was Hans Muff that kept us in line. 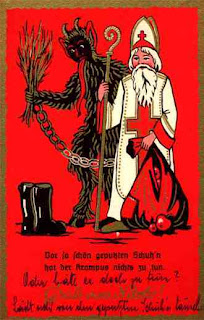 Why not give Hans Muff (Krampus) a go with your little ones this Christmas? It'll really add a new dimension to the holiday season. It never damaged us as kids. Its not like I go around in a human suit or anything. I turned out normal as can be.
Check out this youtube video of Krampus.
I hope they play that old movie adaptation of Charles Dickens' A Christmas Carol. I love that story and the more scary a version the better. I'm not talking about the famous movie mind you. There is a lesser known one that is way more creepy with truly scary looking ghosts that still freaks me out today.
I think I like the story because, much like Krampus, it brings a darker undertone to all the cheer and stuff. It evens out the season.
Oh hey and since we're on the subject of Christmas...the reason I haven't mentioned Jebus in this Blog is because much like Odin, Zeus, Mickey Mouse, the Banana Splits and any other make-believe characters, I don't believe in him. Actually I think I believe in the Banana Splits more. At least they have video evidence of the Banana Splits.
Posted by Filthy the Bear at 1:42 PM No comments: